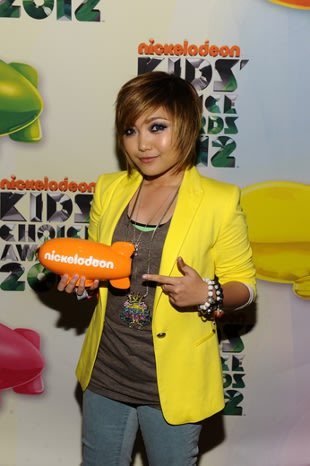 Charice has added another feather in her well-decorated cap, not just for herself, but for the Philippines as well. She won the Nickelodeon Kids’ Choice Awards’ Favorite Asian Artist honors, beating top acts like Korea’s global girl group Wonder Girls, Agnes Monica of Indonesia, and Yuna of Malaysia.

"Millions of Charice's fans voted online, on mobile, on Facebook and on Twitter, showing us not only how popular she is across Asia, but also how active Nickelodeon’s audience in Asia is online,” said Syahrizan Mansor, Senior Director, Programming & On-Air, Nickelodeon SEA. “We couldn’t be happier for her or her fans, and congratulate Charice for winning the inaugural Favorite Asian Artist Awards.

Charice got six million votes from fans all over the world.

Will Smith hosted the ceremonies, which was aired live from Galen Center at the University of Southern California (USC) in Los Angeles.

Kids’ top choices in television, movies, music and sports were revealed through a flying blimp, silver robot and sword swallower.