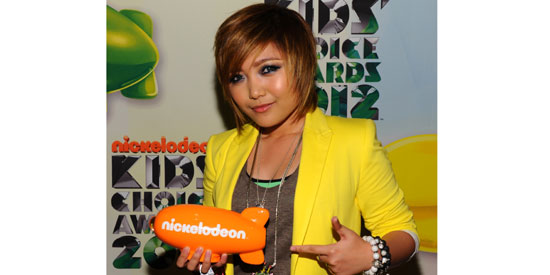 Filipino singing sensation Charice emerged as the Favorite Asian Act in the 2012 Nickelodeon Kids' Choice Award. Charice, who will turn 21 years old on May 10, was able to beat some of the region’s hottest music stars including Korea’s global girl group Wonder Girls (who popularized the song "Nobody"), Agnes Monica of Indonesia, and Yuna of Malaysia.


Now on its 25th year, the Nickelodeon’s Kids’ Choice Awards is seen in over 300 million households around the world. This year marks the first time that the Favorite Asian Act award was handed out.

Hosted by 10-time KCA winner Will Smith, the awards were broadcast from the Galen Center at the University of Southern California in Los Angeles.


In her official Twitter account, Charice shared a photo of her holding the KCA trophy that is shaped as a blimp. She posted another update to express her gratitude for all her fans who helped her win this contest. "Thank You, Chasters for all the hardwork. I love you all," she said in her tweet.

Syahrizan Mansor, Senior Director, Programming & On-Air, Nickelodeon SEA praised Charice for this feat. "Millions of Charice's fans voted online, on mobile, on Facebook and on Twitter, showing us not only how popular she is across Asia, but also how active Nickelodeon’s audience in Asia is online. We couldn’t be happier for her or her fans, and congratulate Charice for winning the inaugural Favorite Asian Artist Awards.”

Other major winners were Alvin and the Chipmunks: Chipwrecked for Favorite Movie and Puss in Boots for Favorite Animated Movie. Katy Perry took home the blimp for Favorite Voice from an Animated Movie for her role of Smurfette in The Smurfs. For TV, Favorite TV Show went to Victorious; Favorite Reality Show to Wipeout; Favorite Cartoon to SpongeBob SquarePants; Favorite TV Actor to Jake Short; and Funniest TV Sidekick to Jennette McCurdy.