Fans Embrace ‘Charice’ After She Comes Out as Gay

Former “Glee” star Charice Pempengco is getting a lot of support from fans after she came out as a lesbian on the Filipino entertainment show “The Buzz.” 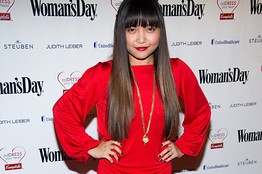 Associated Press
Charice, shown attending the Womans Day magazines Eight Annual Red Dress Awards in New York in 2011, said when she came out, We are all equal, whether you are gay or straight.

“Her sexual orientation did not and will not affect her ability to sing. She is brave for coming out as gay. Let’s all support individuality and talent regardless of one’s sexuality,” one person wrote on Facebook.

Another supporter wrote on Twitter, “Kudos to you, Charice, for making a stand.”

But those with a different perspective weighed in as well.

Ms. Pempengco, 21, came out on Sunday, ending months of rumors about her sexual orientation that took off after she changed from a feminine look of long hair and dresses to a more edgy one of a short boyish haircut and androgynous-style clothing.

On “The Buzz” Sunday, host Boy Abunda asked her about the rumors. She paused, then replied emotionally, “Yes, I am a lesbian.”

“Now I feel free, I can go out of the house without fear and be certain that I’m not stepping on anybody’s toes,” she added.

Later, in an email to The Wall Street Journal, Mr. Abunda applauded the “brave” act by the star, who is preparing for her shows abroad.

“Brave because she can lose her rightful place in the entertainment industry, whose public has yet to get used to lesbian performers. But the feedback of her interview has been very encouraging.”

In the heavily Catholic Philippines, gay men, lesbians, bisexuals and transgendered people have made strides but still face discrimination in their families, workplaces and daily lives.

The difficulties some parents have in accepting their child’s homosexuality is being played out in Ms. Pempengco’s family. She says her mother and brother are upset.

“My mother and I were fighting,” Ms. Pempengco said on “The Buzz.” “I try to understand her since she hurt my feelings, but I have hurt her feelings more. At this stage, we are trying to understand each other.”

Charice, who was called “the most talented girl in the world” by her godmother Oprah Winfrey, was originally discovered on “Star King,” a South Korean talent show, in 2007. Before that, she sang in local contests and appeared on TV talent shows in the Philippines.

Her big break came in 2008 when she appeared on the “Ellen De Generes Show” before releasing her debut album in the Philippines. This lead to her appearing in the second season of “Glee,” playing a foreign exchange student from the Philippines.

She said on “The Buzz” that she feared that some of her fans would not support her after she came out.

“But to those who can accept me, thank you very much,” she added. “We are all equal, whether you are gay or straight.”

In a separate video message aired on a different Filipino show, Charice said: “Honestly, I’m very, very happy. I can’t explain how happy I am right now hearing all the positive things.”

Ellen Degeneres expresed all out support Charice and also Oprah Winfrey who is Charice’s fairy godmother of sorts.

One story leads to another. Charice’s mother, Racquel Pempengco, at a press conference she called, confessed she was once a ‘tomboy.’ She said she has not re-established communication with her daughter.

This is another family drama expose to the public, just like the Barretto’s.

Where does Charice go from here?

One thing is sure. She is at least happy and at peace with herself.