April 2012 - Projection, Lights and Staging News - Charice: To Infinity and Beyond 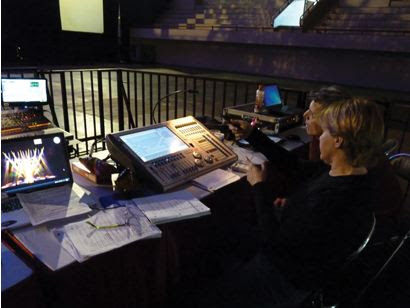 Her design for Charice was influenced both by the star’s young age and her mixed repertoire. “I have incorporated LEDs and video walls as well as 36 intelligent fixtures into my design to give the show an up to date look for her young audience,” Fowler says. “However, she has wide appeal as she performed covers of great classic songs in addition to music from her latest CD. Charice is a talented singer with a voice that doesn’t come along often. The shows have been wonderful, and Charice is a real sweetheart to work with.”

Fowler considers herself fortunate to be working steadily with some of music’s living legends. “I have been working with Dionne since 2003, and she always been great to work with in every way. I also light Marilyn McCoo and Billy Davis, Jr. whenever they need me, and I cannot say enough nice things about them. They are just the best! And speaking of the best: this is the first time I have had the chance to work with Marty Hom,” Fowler continues. “He is an absolute pro in every sense of the word. Marty is now out with the Van Halen tour, but he is still involved in taking care of production issues, which is why he has the reputation of being the best in his field. Dan McGee has taken over as the tour manager out here on the road. This is also the first time I have worked with him, and he is great!”

Fowler is no stranger to using local production, and she dealt with the usual challenges with aplomb. “I have gotten varied lighting fixtures and consoles depending upon what was available in each market. Needless to say, the show has looked different in each venue. I composed a rider asking for a black fiber optic drop, a white chiffon and LED walls, in addition to four mesh panels that I carried and hung vertically upstage. The only things that were consistent throughout the tour were the mesh panels that I brought,” she says. “Fortunately, I am used to touring using local production, and it always seems to come together by doors! I had wonderful crews in each city who worked hard to get the gear up and running, and that makes all the difference when time is a major factor. Thanks to Bernard Chew in Jakarta for programming with me all day and night.”

After Charice’s run, Fowler met up with Dionne Warwick and company for a March 24 show in La Mirada, CA, followed by rehearsals in Los Angeles. Warwick is celebrating her 50 years in show business with a 50th anniversary European tour, which includes the Royal Albert Hall and the Liverpool Philharmonic.