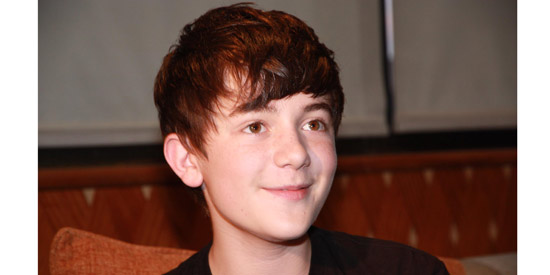 Teen sensation Greyson Chance is in the Philippines for his concert at the Smart Araneta Coliseum on April 22, 2012, organized by WILBROS.


The 14-year-old musician gamely answered questions even after a tiring flight from Kuala Lumpur, Malaysia.


When asked to describe Filipino singer Charice, Greyson said enthusiastically, “She is super talented. She’s a very sweet girl and she’s an amazing stage presence. Her voice is just insane! I mean that girl can sing.”


In November 2011, Greyson had a series of shows in Eastwood Mall, McKinley Hill and Venice Piazza.


Greyson and Charice collaborated on the single “Waiting Outside the Line.” After it’s enormous success, they followed it up with a remix of “Hold On Til the Night.” The teen pop singer was discovered on YouTube after his brother Tanner emailed Ellen Degeneres’ show about the video. In it, Greyson was singing Lady Gaga’s “Paparazzi” while playing the key boards.

He eventually became the first artist signed to Degeneres’ music label eleveneleven. The label produced his single “Broken Hearts” and his first album, Hold on Til the Night.


Celebrities who have become fans of Greyson Chance apart from Degeneres include Ryan Seacrest, Ashton Kutcher and even David Archuleta.

When asked what he liked about “Paparazzi” he said, “I just really like the song. It was weird and it was quirky. I really felt an artistic connection with it.”


He’s excited about the current tour of Lady Gaga which will reach Manila on May 21, “I met Gaga many times. But I can’t wait, I’ve heard many great things about her concert here in Asia. I won’t be able to catch their tour here but hopefully I’ll be able to catch that tour when it comes to America.”

From his original songs that he’d written he’d like to dedicate “Take a Look At Me Now” to his Filipino admirers. “I always tell my fans whenever they feel like they feel they’re being doubted you tell haters ‘Take a look at me Now.’”

Greyson has also been cast in the show Raising Hope locally aired in Jack TV. His likeness with lead actor Lucas Neff who plays Jimmy has allowed Greyson to play the younger version in flashback sequences. When asked about the likeness he said, “Well that was the point! I only met Lucas a couple of times. Technically when I’m shooting he’s not alive. I was just honored to be on the show. It was really fun. They asked me to come in as a recurring guest star. I just had a great time being on set and being able to spend time with the cast. I’m just glad to call them my family in ‘Raising Hope.’”

He’s a huge fan of the Hunger Games book series but has yet to see the movie, “I’m on the second book right now and I’m reading it. I really, really wana see that one. I love the book so far. I read the first book right about when it came out for years ago. I knew a long time before the movie came out at the local library.” When asked if he wanted to be cast in the sequel for Hunger Games, he said, “It would be fun but to be honest with you I’m more of a musician. I’m only into acting a little bit. My main focus is music and not movies.”