06/10/11 - Philippine Daily Inquirer - How it feels to be short and a ‘minority person’ in H’wood: Charice opens up

CHARICE belts “As Long As You’re There,” a show-
stopping number in “Glee’s” recent season finale and
one of the strong tracks of the show’s volume 6
soundtrack album.
LOS ANGELES—Charice was bright and chirpy on the phone, sometimes pausing and exclaiming “Whew!” when the questions demanded more than her usual sound bites.

But the Filipina singer with the multi-octave voice sounded like she relished being challenged, even though she seemed to choke when recalling some painful moments and disappointments in her young life.

In her remarkable journey, Charice has encountered quite a number of big names from various fields. But meeting Oprah for the first time is still tops on her list. “I was star-struck,” said Charice who was only 16 at the time. “Oprah is like my fairy godmother. I’m grateful that she’s still supporting me even to this day.”

After that first meeting and a guest appearance on “The Oprah Winfrey Show,” Charice and mom Raquel were about to fly back to Manila when Oprah, so taken with the petite Pinay, got them off the flight and brought back to her Harpo offices.

Oprah then called Grammy-winning music producer David Foster and asked if he could take Charice in as his artist. Thus began Charice’s climb to the pop music big leagues, resulting in hit singles, a debut album, US concerts with A-list performers and in other countries as a solo artist, and a stint on “Glee.”

“As Long As You’re There,” Charice’s song with “Glee’s” Vocal Adrenaline which got a standing ovation in the recent season finale, is one of the attractions of the recently released album, “Glee: The Music, Volume 6.”

In addition, she was cast in the film, “Here Comes the Boom,” which stars Salma Hayek, Kevin James, Henry Winkler and Fil-Am Reggie Lee.

Asked what it’s like to be short and a minority person—a double whammy if you’re trying to break the glass ceiling in the mainstream US entertainment scene—Charice broke into a hearty laugh and said: “When I was in Boston shooting [‘Here Comes…’], one of the crew members called me one day and said, ‘You’re very talented. I want you to read this sticker.’ The sticker said, ‘Short people rock!’ It was awesome!”

There was a catch in Charice’s voice as she answered our question: If she could go back to any part of her past, which one would it be?

“I would go back to the part before my dad left us,” she said. “We are very happy although our family is just my mom, my brother and I. But of course, I’m still hoping for a happy, complete family.”

Amid her success, Charice cuts a solitary figure at some events, trailed by a handler. “These days, I feel really alone,” she admitted. “My family is in the Philippines.” That’s why a song she belted in a “Glee” episode hit her in the gut. “When I was shooting that scene and singing ‘All By Myself,’ it was very emotional for me.”

Charice paused when asked what chapter in her life she would change and do differently if she could. “When I joined ‘Little Big Star,’ because I was in third place and of course, everybody wants to be a winner,” she said. “Why can’t we change that?” she asked, laughing. She was just 12 at the time, and wanted desperately to win the P1-million grand prize in the “American Idol”-type TV contest for children.

What did she learn from that setback? “It was very painful,” Charice confessed. “I was sad because I really wanted to help my mom. I was depressed for two or three months. I was just in my room, thinking of giving up. But my mom told me, ‘You don’t have to be like this. You can do better. I believe in your talent. That prize was not meant for you. There will be something better.’”

We asked how she reacts to the oft-expressed comment by some that there are plenty of Charice Pempengcos in the Philippines and that she was just fortunate that her videos went viral. A fan, David Dueñas, posted the videos on YouTube, landing Charice her first big TV guest spot in Korea and a fateful invitation on “The Ellen DeGeneres Show.”

Charice replied: “It’s true there are a lot of great singers in the Philippines. But one of the reasons that I got discovered was my story. I’ve been working since I was seven. I call it work because I joined like a hundred singing contests. I told my mother to stop working. I had to go to school at the same time and it was crazy and now I’m here. I’m not saying it’s the best story ever but [it was a big factor].”

She has sung with brio even at the most formidable US events and in famous venues—from President Obama’s pre-inauguration galas to the Madison Square Garden. Charice revealed, however, that she still gets butterflies in her stomach before she strides onstage.

And when is she most vulnerable? “Reading some of the negative stuff sometimes still affects me,” Charice admitted. “Every time I feel insecure or hurt, I post a quote [on my Twitter]. Yeah, that is another thing not known about me. I post something like, ‘Behind my smile is everything you’ll never understand.’ That’s how I do it. I want to let it out.”

Charice, who turned 19 last month, considers her birthday last year memorable because she spent it with 500 underprivileged children. Still very much a young girl at heart, she said, “And I got to dance with my crush in the Philippines, [actor] Sam Milby!”

As for her long-term goals, Charice said: “Just in case I don’t last in show business, I would love to be a lawyer.” Why law? “If I go into entertainment law,” she quipped, chuckling, “I can [write] my own contracts!”

When we prodded her to share what she dreams of achieving five years from now, she paused and then said: “Maybe become a Grammy winner, a successful actress.” We said we could see her in musical theater, too, but she demurred: “Maybe someday— I love my career right now as a pop singer.”

Before we put down the phone, we asked Charice if she could describe in three words her journey thus far. After yet another pause, Charice, slowly choosing and seemingly savoring what each word meant to her, said: “Enlightening … unbelievable … unexpected!”
_________________
Welcome to weheartCHARICE.com, a fan forum dedicated to the one and only Charice!

Posts : 555
Join date : 2012-06-05
I recall how Charice blushed when Sam Milby spoke to her on the Ruffa show where she displayed her majorette skills.

Posts : 555
Join date : 2012-06-05
It is unfortunate Charice was not invited to gueststar in Season 3. Lots of theories as to why. Initially Charice's acting skills were under fire with no consideration that she was a rookie in acting. Her only other stint in acting was the filipino film "Ice Cream" - a film about herself. However by the time the New York Finale occurred, Charice's acting skills had improved noticeably, perhaps the result of working with A-List actors in "Here Comes the Boom". It is too bad that videos that include Charice's encounter with Lea Michelle in the ladies room where they became friends are no longer available. Here is Charice as Sunshine Corazon singing "As Long As You're There" - an original song written specifically for her showing off her very wide vocal range. The video has been modified to a lower pitch which is closer to Charice's true voice. Glee had autotuned her voice to sound higher pitched in all three appearances.

As Long As You're There (Vocal w/Lyrics)

Posts : 61
Join date : 2012-03-30
another great interview!
between the words, it makes understand why among many good singers it was charice who became famous.
the whole "story" would never have happened without that particular person in the center.
even without staying in the top 100 worldwide pop stars, charice can be sure to have a bright future and she will continue to have an impact, be it music, TV, business, society, or various social issues (like "minority"), or even politics. 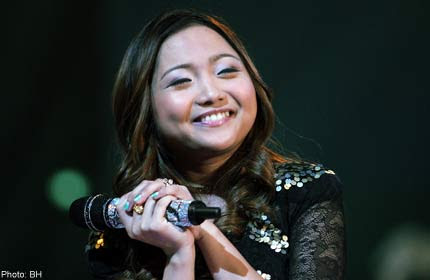 [Charice Book Feature] My Filipino Connection: The Philippines in Hollywood (2012)