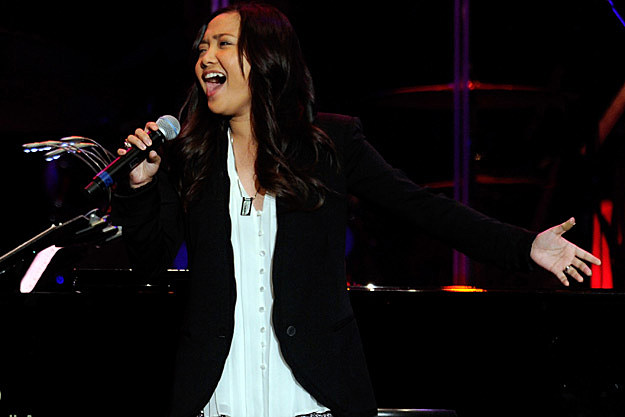 Happy 20th birthday, Charice! In honor of the Filipina powerhouse’s day of birth and massive musical talent, we’re asking Charice fans to vote on their favorite original song from the former ‘Glee‘ starlet.

She might only have two studio albums in her discography as of right now (May 2012), but those songs and her incredible voice (comparable to divas such as Whitney Houston, Jennifer Hudson and Celine Dion) have launched her into international superstardom.

Off of her self-titled debut album, Charice unleashed two singles: ‘Note to God’ and ‘Pyramid.’ ‘Note to God’ was written by Diane Warren and produced by David Foster, and it was first recorded by JoJo for her album ‘The High Road.’ However, it was Charice who made the song a hit, performing it on ‘The Oprah Winfrey Show’ and charting in the Billboard Hot 100. Although ‘Note to God’ was a success for Charice, her single ‘Pyramid’ is the track that really cemented her as a star in the U.S. The song features Iyaz and was produced by teen pop hitmakers Twin, and it went all the way to No. 1 on the Billboard Hot Dance Club Songs chart.

In 2011, Charice released her second studio LP ‘Infinity.’ Her first single ‘Before It Explodes’ was penned by Bruno Mars, who also produced the track along with his Smeezingtons team. On her follow-up single ‘Louder’ — the track was produced by Dreamlab, who are also known for their work with Nicki Minaj, Demi Lovato and Selena Gomez — Charice proved that she can blow the roof off any establishment with her other-worldly, larger-than-life voice. Finally, her song ‘One Day’ is a rousing song about following your heart; and with the help of Nick Jonas, who produced and wrote the track, Charice roped in fans once again with her powerful vocals.

So, Charice fans, out of the five tracks we chose, which is your favorite song by the Filipina songstress? Cast your vote below!