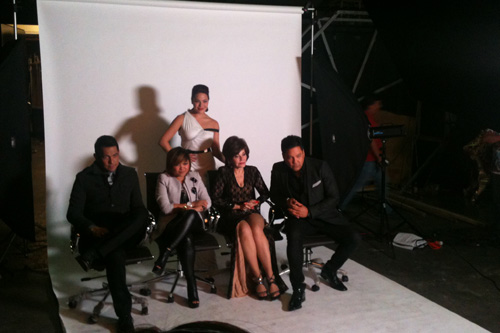 “We’re all in for quite a surprise,” singer Gary Valenciano told ABS-CBNnews.com on Monday during the pictorial for the Philippine version of the international talent competition.

Valenciano is one of the four mentor-judges on the show, along with singers Martin Nievera, Charice and Pilita Corrales.

On “The X Factor,” the contestants are divided into males, females, groups and the over-30s, or contestants over the age of 30. The judges will then be assigned to mentor a team.

Valenciano said he has no preference on who to mentor in the show. “Of course, if I’m given groups, I was once with the Kundirana,” he said, referring to the La Salle Greenhills singing group where he was once a part of during his high school days. “Let’s see.”

Nievera, for his part, said he dreads to be given the groups. “If I have a choice, males – or even females – but soloists,” he said.

In preparation for “The X Factor Philippines,” which will start airing in late June, the mentor-judges are undergoing workshops with foreign representatives of the show, who are currently in town.

Nievera revealed that they have been told that they have to be “brutally frank,” in part so as not to waste much airtime. “I don’t know yet (if I will be a mean judge) because I’m not a mean person,” he said. “But I will add humor to my tactlessness.”

But there is one aspect of the show that the judges admit will be difficult: telling a contestant that they have been eliminated.

In the U.S., Scherzinger nearly had a breakdown on national TV when her vote eliminated Rachel Crow from the contest and the 14-year-old bawled onstage.

“You can never be prepared for that,” Nievera said of the show’s brutal cuts.

While noting that the rejection is only “for that time,” Valenciano admitted that it will be difficult.

“It’s a hard pill to swallow for all of us, including the mentors,” Valenciano said.

Nievera also revealed that he wasn’t expecting to be a judge on the show.

“I thought I would be the host,” he admitted.

With the format of “The X Factor,” it is also unavoidable that the judges will have to compete with each other.

Asked if he expects a renewal of his rivalry with Valenciano, the balladeer said, “For the sake of TV, sure, why not?”

“Musically, yes, you might see it,” he said, quickly adding that after all these years, he and Valenciano have become almost like brothers in the music industry.