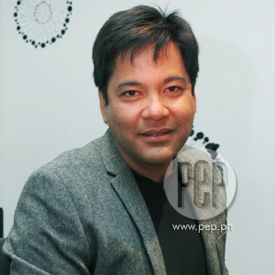 Martin is one of the judges on the program, X Factor Philippines, along with Gary Valenciano, Charice Pempengco and Ms. Pilita Corales.

The Concert King related to us that here is where it was proven that there are a lot of great Filipino talents that have just not been given the chance.

He also explained to us how challenging their roles are as judges in the aforementioned program on ABS-CBN.

"My hair is standing [on end] just by saying X Factor because I know the results, I know what we went through as judge.


"I don’t know if I’m a good judge, I know that I’m a first-time judge, so I’m asking all of you who’ll watch, have pity on me.

"I try to be a nice judge, but a judge's job is difficult, especially here in the Philippines because the sense of humor and the breaking point for the sensitive ones are different.


"At [iba ang] pikon ng Pinoy, or Asians for that matter, [compared to] X Factor UK [or] Australia.

"And the sensitivity is different for Pinoys, or Asians for that matter, [compared to] X Factor UK [or] Australia.


"They want us to be a little bit more British, much more sarcastic like Simon na, 'You’re not good, don’t waste our time.'

"I don't think Pinoys are able to do that. I can't speak for Gary, Charice or Tita Pilita.

"For me, I just deal with it through laughter, through sense of humor. They want a little friction between the judges, but the friction with me, Gary, Charice and Tita Pilita are about constructive criticism.

"Gary is very technical, I am very picky."

At the start of X Factor Philippines, one of the questions is the selection of Charice because she is still too young to be a judge and perhaps lacking in knowledge even though she has become an international singer.

Martin immediately defended her to us.

"I feel that's what people felt in the beginning...But when it comes to musical taste, new sounds, new beats, Charice has an edge compared to everyone.


"She’s been through David Foster, recording with RNB, hip hop and the rappers of the world, so [she knows] what's new.

"We're looking for that X Factor, the whole package which is not just about great singing.

"We're looking for that certain something that can't be defined, that's where Charice excels.

"She knows when she is being fooled, she knows when the voice is similar to this and that," according to Martin.


"Alam na alam niya, parang she’s been there, done that and yet she’s so young.

"She really knows, it's like she's been there, done that and yet she's so young.


"Tita Pilita on one end, Charice on the other.


"Gary and I are in the middle. So it’s nice to watch X Factor, I hope everybody watches it, June 23 na ang start.

"Actually of all the judges, Charice is my favorite because she really knows how to judge, she is good at making decisions.

"If there is a little friction among the judges, Charice is the deciding factor. Can you believe that? Because she's always right."


Only X Factor and Charice exerpts are posted and translated above. To read the entire article, click HERE
_________________
Welcome to weheartCHARICE.com, a fan forum dedicated to the one and only Charice!

about the cultural issue, I appreciate that he is outspoken.
IMHO PH is a leading country with its showbiz, and need not "franchise".

x-factor is one of the better shows, but in general, I must say these angloamerican formats had negative impact on german culture, exactly from the point martin is making.
their kind of humor creates negativity in our hearts. we are not up to it and we don't ever need. just my opinion.
our genuine sarcasm can blend with that attitude in a way that can be hurtful to artists and to progress of culture.
because it leads to "boulevard" behaviour and devalues musical interest and the work of the artists, who still may have some imperfection.
--

anyway, charice will be a good judge because she knows all that too. she can handle it with honor, she made that experience in the west, she knows to avoid disgrace.

hope she will discover a couple of world class talents. good luck!