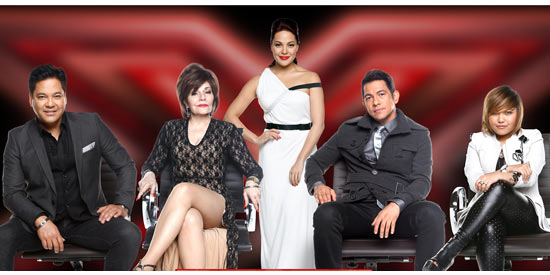 The X Factor Philippines is searching for undiscovered talent 16 years old and above that will be divided into four categories: Girls, Boys, Adults and Groups. They should be willing to brave the panel for a chance to win P4 million worth of prizes, and become the next Pinoy multimedia star.

After months of auditions in 70 cities across the country, more than 20,000 hopefuls flocked to the audition venues in hopes of fulfilling their dreams. But it wasn’t an easy ride for each and every one of them as they underwent a tedious screening process.

As early as the audition stage, the hopefuls must instantly impress the judges and at the same time an audience of thousands that can be a potential legion of fans. The auditionees need at least three yes’s from the judge-mentors to be able to proceed to the next stage— the Boot Camp.

Before advancing to the Judges’ Homes stage, The X Factor Philippines producers will then reveal which category judge-mentors Martin, Gary, Charice, and Pilita will be mentoring. The judge-mentors then take the contestants to their respective "Judge's Home" where they will select the best performers to take to the live show.

Only three contestants from each category will complete the final 12 contestants who will proceed in the last and final stage of the competition. At this point, the finalists must face the fifth and final judge who has the sole power to turn their dream of becoming a star into reality— the viewers.

Who will become the first grand winner of The X Factor Philippines and win about P4 million in prizes? Will the winner come from the Boys, Girls, Adults, or Groups? Who among the mentors will coach the country’s next singing superstar?

First introduced in the UK, The X Factor has conquered more than 30 countries as of mid-2011 and produced more than 50 winners around the world. Its UK format gave birth to multi-platinum album selling artists Leona Lewis, Alexandra Burke and the newest group hitting the charts, One Direction. To date, it is considered to be UK’s biggest talent search.

Meanwhile, in the U.S., the second season of The X Factor USA will soon hit TV screens with Britney Spears and Demi Lovato joining the judges table. Together with Simon Cowell and L.A. Reid, they are about to search the successor to first The X Factor USA grand winner, Melanie Amaro.

The X Factor Philippines will start airing this Saturday (June 23) after Maalaala Mo Kaya on ABS-CBN. The show also airs every Sunday after Sarah G Live.

Posts : 555
Join date : 2012-06-05
Maybe someday there will be an X-Factor international pitting the 50plus winners against each other. The UK, USA, and the Philippines can take turns hosting the show.