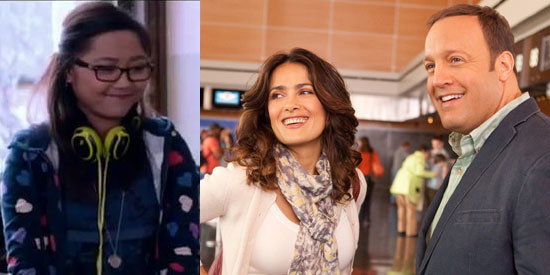 Charice is featured prominently in the trailer of the Hollywood movie Here Comes the Boom. The Filipina singer can be seen seated in the front row of a classroom and she even has a dance number that is shown briefly in the trailer.


In this project, Charice got the chance to work with Mexican-American actress Salma Hayek, comedian Kevin James, and veteran actor Henry Winkler.


The internationally acclaimed singer plays one of James' students in the film. In fact, Charice was spotted filming Here Comes The Boom at Faneuil Hall in Boston, Massachusetts last May.


In an interview with USA Today on May 24, 2011, Charice was quoted as saying about the movie: "Henry Winkler plays a music teacher, and Kevin James is another high school teacher who sidelines as a martial arts fighter to save the music program. I play a student. She's a little like Sunshine; she's a brainiac and her father wants her to go home to the Philippines to work in a restaurant."

Here Comes the Boom is produced by Adam Sandler and directed by Frank Coraci (The Wedding Singer, Click).

SYNOPSIS. Former collegiate wrester Scott Voss (James) is a 42-year-old apathetic biology teacher in a failing high school. When cutbacks threaten to cancel the music program and lay off a teacher (Henry Winkler,) Scott begins to raise money by moonlighting as a mixed martial arts fighter. Everyone thinks Scott is crazy – most of all the school nurse, Bella (Hayek) and – but in his quest, Scott gains something he never expected as he becomes a sensation that rallies the entire school.


Opening across the Philippines in October 2012, Here Comes the Boom is distributed by Columbia Pictures, local office of Sony Pictures Releasing International.