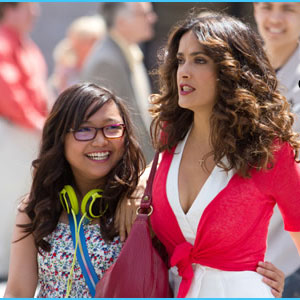 "I play a student. She's a little like Sunshine; she's a brainiac and her father wants her to go home to the Philippines to work in a restaurant," says Charice about her role in Here Comes the Boom. In this photo, she's with Hollywood actress Salma Hayek.
Photo: www.caughtonset.com
After portraying a foreign exchange student in Glee Season 2, Charice is once again cast as a student for the Hollywood film, Here Comes the Boom.

In the American musical comedy series Glee, Charice was tapped to portray Sunshine Corazon. For the action-comedy film Here Comes the Boom, she plays a student named Malia.

In her Twitter account, Charice announced on Monday (Tuesday in Manila): "Done with the movie!!! It was nice working with everybody! Kevin James, Salma Hayek, Henry Winkler, everybody! Now it's party time. :]"

Helmed by The Wedding Singer director Frank Coraci, Here Comes the Boom is scheduled for release in 2012.


In an interview with USA Today last May 24, the 19-year-old singer-actress revealed some details about her character in Here Comes the Boom.


Charice was quoted as saying in the interview, "Henry Winkler plays a music teacher, and Kevin James is another high school teacher who sidelines as a martial arts fighter to save the music program. I play a student. She's a little like Sunshine; she's a brainiac and her father wants her to go home to the Philippines to work in a restaurant."


The Filipina singer-actress was last seen in the 2009 Hollywood live-action animation movie, Alvin and the Chipmunks: The Squeakquel.