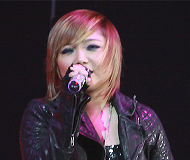 ‘This is the look that I want,’ says Charice (Photo by JUDE BAUTISTA)

Geneva Cruz deemed that the international singing sensation might’ve felt “bored” with her previous look that’s why she took a 360-degree turn in her image.

“Si Britney Spears [nga] nagpakalbo one time. And I understand her kasi I grew up in this business,” said the sexy singer in a “TV Patrol” interview aired March 13.

"Britney Spears went bald at one time. And I understand her because I grew up in this business."

The changes in Charice—whether in her musical inclinations or her looks—will continue as her career soars, another industry veteran, Basil Valdez, said. Nevertheless, he did not overlook the improvement in the young singer's vocal prowess.

"You can see the changes in terms of vocal ability."

Meanwhile, Kuh Ledesma stood up for the 19-year-old performer, whose sexual preference got questioned amid the buzz about her “tomboy” look. The singer apparently can relate to Charice as she had also been rumored to have had “a different preference.”

"I said you are all gossips. That's wrong because there are a lot of gossips that are not true."

At the press conference for her recently concluded Manila “Infinity Tour” concert, Charice wasn’t pleased when the gender issue was brought up.

"Why would you ask me that question? I think that's a very inappropriate question. For me, just love me. I'm a person. If you think I'm a boy or a girl or if I look like a boy, then fine. I'm Charice,” she responded.

Charice maintained that the drastic change in her look was her decision.

“’Yun ‘yung makakapagpasaya sa akin. I’m gonna get a haircut. I’m gonna do it. And I was actually proud,” said she.

"This is what makes me happy. I'm gonna get a haricut. I'm gonna do it. And I was actually proud."

Having been a target of criticisms especially online, Charice couldn’t care less about what others think of her.

"This is the look that I want. The only thing that you can do is move on,” related the “Louder” singer.

Prior to her latest look, Charice had also sported long straight locks, wavy tresses, as well as her notable “geeky” look on “Glee.”