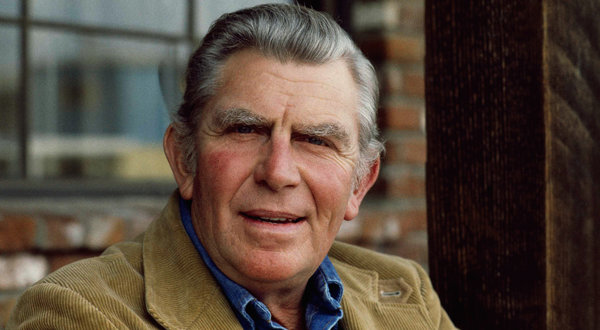 Andy Griffith, an actor whose folksy Southern manner charmed audiences for more than 50 years on Broadway, in movies, on records and especially on television — most notably as the small-town sheriff on the long-running situation comedy that bore his name — died on Tuesday at his home on Roanoke Island in North Carolina. He was 86.

His death was confirmed by the Dare County sheriff, Doug Doughtie.

Mr. Griffith was already a star, with rave reviews on Broadway in “No Time for Sergeants” and in Elia Kazan’s film “A Face in the Crowd,” when “The Andy Griffith Show” made its debut in the fall of 1960. And he delighted a later generation of television viewers in the 1980s and ’90s in the title role of the courtroom drama “Matlock.”

But his fame was never as great as it was in the 1960s, when he starred for eight years as Andy Taylor, the sagacious sheriff of the make-believe Southern town of Mayberry, running weekly herd on a collection of eccentrics like his ineffectual deputy, Barney Fife, and the simple-minded gas station attendant Gomer Pyle while, as a widower, patiently raising a young son, Opie.

“The Andy Griffith Show,” Monday nights on CBS, was No. 4 in the Nielsen ratings its first year and never fell below the Top 10. It was No. 1 in 1968, its last season. After the run ended with Episode No. 249, the show lived on in spinoff series, endless reruns and even Sunday school classes organized around its rustic moral lessons.

The show imagined a reassuring world of fishin’ holes, ice cream socials and rock-hard family values during a decade that grew progressively more tumultuous. Its vision of rural simplicity was part of a TV trend that began with “The Real McCoys” on ABC in 1957 and later included “The Beverly Hillbillies,” “Green Acres,” “Petticoat Junction” and “Hee Haw.”

But by the late 1960s, the younger viewers networks prized were spurning cornpone, and Andy had decided to move on to movies after the 1966-67 season. CBS made a lucrative offer for him to do one more season, and the “The Andy Griffith Show” became the No. 1 series in the 1967-68 season. But Mr. Griffith had decided to move on, and so had the zeitgeist. “Rowan & Martin’s Laugh-In,” with its one-liners about drugs and Vietnam, and “The Mod Squad,” about an integrated police force, were grabbing a new generation of viewers.

Andy Griffith was considerably more complex than Andy Taylor and his fellow denizens of Mayberry, although the show was based on his hometown, Mount Airy, N.C.

Beginning with the lead in Elia Kazan’s film “A Face in the Crowd” in 1957, the story of a roughhewn television personality who becomes a power-crazed megalomaniac, Mr. Griffith brought a canny authenticity to dark roles.

From the 1970s to the 1990s, Mr. Griffith starred in no fewer than six movies with the words “murder” or “kill” in their titles. In 1983, in “Murder in Cowetta County” he played a chillingly wicked man who remains stone-cold even as he is being strapped into the electric chair.

Mr. Griffith’s fans may have imagined him as a happy bumpkin, but he enjoyed life in Hollywood and knew his way around a wine list. His career was controlled by a personal manager, Richard O. Linke, who forbade Mr. Griffith to solicit advice from anyone else, even his wife.

“If there is ever a question about something, I will do what he wants me to do,” Mr. Griffith said in an interview with The New York Times Magazine in 1970. “Had it not been for him, I would have gone down the toilet.”

Far from the relaxed, gregarious, drawling Andy Taylor, Mr. Griffith was a loner and a worrier. He once hit a door in anger, and for two episodes of the second season of “The Andy Griffith Show” he had a bandaged hand (explained on the show as an injury Sheriff Taylor sustained while apprehending criminals).

But the 35 million viewers of “The Andy Griffith Show” would have been reassured to learn that even at the peak of his popularity, Mr. Griffith drove a Ford station wagon and bought his suits off the rack. He said his favorite honor was having a 10-mile stretch of a North Carolina highway named after him in 2002. (That was before President George W. Bush presented him with the Presidential Medal of Freedom in 2005.)

Another honor was having his character place No. 8 on TV Guide’s list of the “50 Greatest TV Dads of All Time” in 2004. (Bill Cosby’s Dr. Cliff Huxtable was No. 1.) But one honor that was denied him was an Emmy Award: surprisingly, he was nominated only once, for his role in the TV movie “Murder in Texas,” although Mr. Knotts won five Emmys as Deputy Fife on “The Andy Griffith Show” and Ms. Bavier won one as Andy’s aunt. The show itself was nominated three times but also never won.Andrew Samuel Griffith was born in Mount Airy on June 1, 1926, the only child of Carl Lee and Geneva Nann Nunn Griffith. His father was a foreman at a furniture factory. Mr. Griffith described his childhood as happy, but said he never forgot the pain he felt when someone called him “white trash.”

After seeing the trombonist Jack Teagarden in the 1941 film “Birth of the Blues,” he bought a trombone from Sears, Roebuck & Company with money he earned sweeping out the high school for $6 a month. He wheedled lessons out of a local pastor, who later recommended him to the University of North Carolina, where he won a music degree and married Barbara Edwards. He moved on from the trombone to singing, and for awhile aspired to be an opera singer.

After first aspiring to be a minister, he tried teaching music and phonetics at the high school in Goldsboro, N.C., but left after three frustrating years. “First day, I’d tell the class all I knew,” he told The Saturday Evening Post, “and there was nothin’ left to say for the rest o’ the semester.”

In spare moments Mr. Griffith and his wife put together an act in which he posed as a preacher, telling jokes about things like putting frogs in the baptismal water, and she danced. They played local civic clubs.

In 1953, speaking to a convention of the Standard Life Insurance Company in Greensboro, Mr. Griffith, in his preacher persona, told a comic first-person tale about attending a college football game and trying to figure out what was going on. Some 500 discs of his monologue were pressed under the title “What It Was, Was Football,” and it became a hit on local radio. Mr. Linke, then with Capitol Records, scurried to North Carolina to acquire the rights and to sign Mr. Griffith.

Mr. Linke began guiding Mr. Griffith’s career in television and nightclubs. His break came in 1955, when he was cast in the Broadway play “No Time for Sergeants” as a mountain yokel drafted into the Air Force, a role he had already played on television, on an episode of “Playhouse 90.” The New York Journal-American called him “an engaging and brilliant natural,” and the play was a hit, running for almost two years. He played the same role in the 1958 film version, with what Bosley Crowther of The Times admiringly called “staggering simplicity.”

In Mr. Griffith’s first movie, “A Face in the Crowd” (1957), he played a far more complicated role: a mentally unbalanced vagrant who is discovered playing the guitar in an Arkansas jail and becomes a beloved television star until he is undone by his dark side. Mr. Griffith told The Times Magazine that he was so consumed by the stormy character that it affected even his marriage.

“I’ll tell you the truth,” he said. “You play an egomaniac and paranoid all day and it’s hard to turn it off at bedtime. We went through a nightmare.”

In 1959, Mr. Griffith returned to Broadway in the musical comedy “Destry Rides Again,” in a role that had been played in films by Tom Mix, James Stewart, Joel McCrea and Audie Murphy. Though reviews were mixed, Newsday declared, “There isn’t a more likable personality around than Andy Griffith.”

The pilot of “The Andy Griffith Show” was actually an episode of “The Danny Thomas Show” in February 1960. Danny Williams (Mr. Thomas) is arrested by a sheriff for running through a stop sign while driving through Mayberry.

Sheldon Leonard, producer of Mr. Thomas’s show, intended “The Andy Griffith Show” to fit the image of its star. Mr. Griffith negotiated for 50 percent ownership, which enabled him to be a major player in the show’s development.

A critical element to the show’s success was casting Mr. Knotts as the inept but lovable sidekick. So was the simple but appealing formula: characters would confront a problem, then resolve it by exercising honesty or some other virtue.

When Mr. Knotts left the show in 1965, a year after Mr. Nabors, Mr. Griffith said he became “nervous” about its future. Some principal writers had also left, and critics and viewers perceived the later years of the show as lacking the sparkle of earlier scripts and more lovable stars. Ratings, however, never tottered.

In the 1968-69 season, Mr. Griffith produced a sequel, “Mayberry R.F.D.,” with Ken Berry starring as a widowed farmer and many of the regular characters returning. It ran three seasons.Mr. Griffith’s career stalled after he left the show. Despite signing a five-year deal with Universal Pictures, he said he was not offered roles he wanted to play. “I thought I was hot stuff and go right into the movies,” he said in an interview with The Virginian-Pilot in 2008. “If didn’t work out that way.”

He returned to television in the fall of 1970 with “The Headmaster,” but it lasted only until January. It was replaced by “The New Andy Griffith Show,” but that was not a success, either, and was off the air by the summer. Then came a slew of made-for-TV movies.

In 1984, he played a deceptively laid-back prosecutor in the miniseries “Fatal Vision,” impressing NBC enough to make him the star of a TV movie, “Diary of a Perfect Murder,” which served as the pilot for a new series. Mr. Griffith played an unassuming but cagey defense lawyer in that series, “Matlock,” which made its debut in 1986 and went on to have an even longer life than “The Andy Griffith Show,”, running until 1992 on NBC and for three more years on ABC.

Mr. Griffith continued to play occasional movie and television parts, and in 1996 recorded a gospel album, “I Love to Tell the Story: 25 Timeless Hymns” that went platinum and won a Grammy.

If that weren’t enough to dumbfound the old Mayberry fans, he made a commercial in 2010 extolling President Obama’s health care legislation. Republican politicians and conservative talk show hosts leapt on him mercilessly, while satirists like Jon Stewart of “The Daily Show” made boisterous fun of the brouhaha.

One thing that always bothered Mr. Griffith was people’s assumption that his depiction of Sheriff Taylor was him pretty much playing himself. He said he not only threw himself into creating a textured persona for the small-town lawman, but also helped write almost every episode — though he didn’t receive writing credit.

“You’re supposed to believe in the character,” Mr. Griffith said. “You’re not supposed to think, ‘Gee, Andy’s acting up a storm.’ ”