The Oprah Winfrey Show
Finale: Finale: Oprah's Search for the World's Most Talented Kids
May 18, 2009


Charice debuted her first international single "Note To God", which was first included in Jojo's 2006 album "The High Road". Other notable guest on the show was Taylor Swift and Lang Lang. 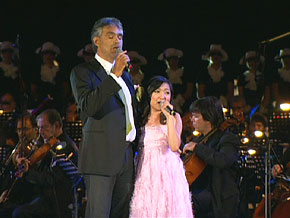 In 2008, Charice Pempengco wowed the Oprah Show audience with her jaw-dropping performance of Whitney Houston's "I Have Nothing." Since then, Charice has sung all over the world and shared the stage with music legends Celine Dion and Andrea Bocelli. With the money Charice has earned in only one year, she's bought her mother their very first house and car.

The upcoming year doesn't look too bad for Charice either. She recently signed a recording contract with Warner Records, and her international debut album will be released in late 2009. Plus, she's landed her first film role in Alvin and the Chipmunks: The Squeakquel. 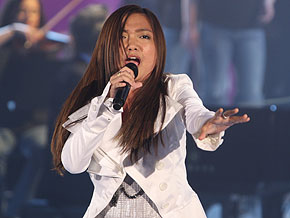 Charice is performing her debut single, "Note to God," which was written by legendary songwriter Diane Warren. "I had written the song, and when I heard [Charice's] voice, I thought that would be the perfect song [for her]," she says. "And, wow, did you prove way beyond what I could have hoped for!"

Music superstar David Foster produced "Note to God." He says watching Charice sing reminds him of when her first saw Celine Dion perform at only 18 years old. "In my world, this only happens two or three times probably in my lifetime," he says. "[Charice] doesn't crack under the pressure. That's so important. The more you lay on her, the greater she becomes, which is just amazing." 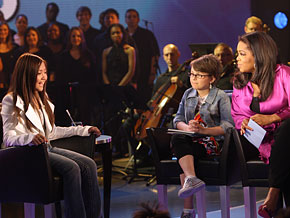 Charice has spent her whole life singing the tunes of her idols, so she says she's thrilled to have a song to call her own. "I'm not going to sing other songs now," she says. "People are going to [hear this and are] going to say, 'Oh, that's Charice's song.'"

She's met some big-name stars in the past year, but there's still one guy Charice would love to see face-to-face. "I want to meet Justin Timberlake," she says. "I want to try some fast songs and dance moves because I really love to dance also."

Charice says she isn't dating anyone right now, but she does have a crush. "It's Josh Groban," she says. "I was with him last month, and I was like, 'That's Josh Groban!'"


Note to God by Charice Pempengco HD from sumotran89 on Vimeo.