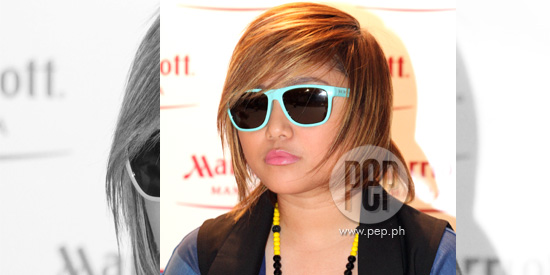 “I really, really want to tell all the people that I don’t care if you hate it, I don’t care if you don’t like it. I’m happy now. I’m extremely happy—it’s unbelievable. I could cry, I could cry like, wow! I can’t believe I’m going out in public showing my tattoos, showing my hair, showing my outfit—I feel more free," says Charice.
Photo By: Noel Orsal
Samu’t saring mga intriga at kuwento ang lumalabas dahil sa kapansin-pansing bagong imahe ni Charice sa kanyang pagbabalik sa bansa kamakailan.

An assortment of intrigues and stories are coming out because of Charice's noticeable new image upon her return to the country recently.

PEP.ph was able to talk to Charice at Cinema News yesterday, May 14, during The X-Factor contract signing and pictorial at the ELJ Building of ABS-CBN Compound.

Her words have some meaning regarding her much talked about new image.


Aniya, “I don’t care whatever you think.

According to her, "I don't care whatever you think.


"Tao ako—at least tao ako. As long as my fans love me and support me, I’m good with that.

"I'm a person-at least I'm a person. As long as my fans love me and support me, I’m good with that.

“However, kahit sino man ang mag-stay with me 'til the end of my career… those are the people that I trust.

"However, whoever stay with me 'til the end of my career... those are the people that I trust.


"And the others that still have doubts, questions and everything, bahala na sila.”

"And the others that still have doubts, questions and everything, it's up to them.”

THE REAL CHARICE. The international singer explained the reason for her new image.


“Honestly, actually hindi talaga siya change image—what you see now is the real me and what you see before wasn’t me.

"Honestly, it's not a matter of an image change-what you see now is the real me and what you see before wasn't me.


“A lot of people around me, like in the U.S. and here, they didn’t really know what I really wanted so they were deciding for me.


“I didn’t get the chance to do that on myself.

"Now that I’m being so independent while it’s early...

TATTOO'S MESSAGE. The words “I Never Knew True Love Until Someone Broke My Heart” is Charice's tattoo on her left arm.

According to her, about her tatto, “It’s a true story but I’d rather not tell further. A lot of people are asking.

"Again, when I have one put on, there's a meaning. I don't want to put something just because.


"When I put something like this, it makes sense.

“In L.A. [Los Angeles], I’m not gonna get to a point where I’m going to put something like [a lot of tattoo].

“It’s just part of me. Part of the look and everything, like an accessory—that’s it.”

Mo Twister and his two co-DJs got suspended on Good Times of Magic 89.9 because of the false hashtag about Charice's sex video.

In Charice's tweets, she stated that Mo needs to find a good lawyer because what they did might lead to a lawsuit.

Is she going to go through with her thread?

"Oh, actually I can't talk. My lawyer told me so," she said.

Charice was compared to Jessica Sanchez, who is now in the Top 3 of American Idol.

Despite the negative comments from several fans of Charice and Jessica about their respective idols, Charice is happy with the good things happening to Jessica.

In Jessica's interviews, she mentioned she wants to work with Charice and Sarah Geronimo.

"I think it can't be avoided among fans to become defensive. Of course, there are articles out there comparing me and Jessica. So of course the fans would be defensive about it.


“It’s like what happened to me and Ate Sarah. Her fans and my fans are being so defensive kasi they’re comparing.

"It's like what happened to me and Ate Sarah. Her fans and my fans are being so defensive because they're comparing.

“Personally, Ate Sarah and me, we’re good, so I think that’s just one of the reasons—that’s why they are so defensive.

“They are sending hate e-mails to Jessica because I see a lot of my fans who also support her.


"I haven’t met her but that would be nice kung magkikita kami.

"I haven't met her but that would be nice if we see each other.

“I’ve seen the article but not the video. I think that’s nice.


“I really feel she’s going to win, but if she doesn’t win, well, you know, political… but I feel she will [win].”

COLLABORATION. Another Filipina who is making a name in the international scene is Cheesa who joined the show, 'The Voice'. 'The Voice' is another singing talent show broadcasted in the U.S.

There is a collaboration right now with Charice and Cheesa.


“Right now, I’m very excited. I’m not sure if you guys remember Cheesa from The Voice.

“I’m really excited because I wrote a song for her and we’re collaborating.

“She’s very excited because she wanna go here in the Philippines to release some singles.

“We’re looking for other artists here to have a duet with her," pagbabalita ni Charice.

Charice is sure she is not threatened or insecure with the growing popularity of Jessica and Jessica internationally.


“Everytime I see someone like Cheesa [and] Jessica, I got so upset when something happens... like they get to the bottom three or when they get kicked out.

“I’m just very proud of them and maybe in the future, you never know, we’ll collaborate.”

On the X-Factor Philippines, Charice is one of the judges - along with Martin Nievera, Gary Valenciano, and Pilita Corrales.

What kind of judge is she?


“I just really wanna be honest, but not like taklesa [tactless] way. I wanna be kind and honest to a person.

“But the voice you could actually say, ‘Yes, I can hear that in the radio.’

"I can hear that person perform on the radio, that the person can sell records.


"I really wanna fulfill that.”